Hey y’all! I’m going to be in New Zealand for the next week sans internet and computer. But, I’ll be writing a travel journal along the way for one of my friends. With her permission, I’ll be scanning it into here for your viewing pleasure!

My friend messaged me on Facebook the other day. It’s true that I took a lot of food photos in Vietnam. However, I have not done the same in Australia. For one, I’m always eating dorm food every day, as the International House has a dining hall. Secondly, Australia doesn’t seem to have its own distinct cuisine. Like the USA, Australia is diverse. As a result, the restaurants around Sydney are a mash-up of all sorts of different foods and cultures.

That’s not to say that Australian food is exactly like the USA, however. Oz has its own little novelties to be enjoyed. Such as: Australia’s most notorious food. One day, some beer company looked at its leftover yeast extract and decided: Dang, I bet that would be tasty. The company then hired a food technologist to turn the yeast waste product into an edible spread. After a little autolysis, onions, and celery extract, he managed to make a sort of sticky black paste… thing. Australians lap this stuff up, but to me, it’s on the same level as Japanese natto. Wikipedia describes it as “salty, bitter, and malty.” I describe it as “an acquired taste.” When I’m being polite about it. Unlike vegemite, this Australian creation is actually delicious. It’s simply a sponge cake cube covered in chocolate icing and desiccated coconut. Yet somehow it’s so light and fluffy and tasty and my dining hall occasionally serves them in huge trays. On July 25th, my residential college celebrated Christmas in July, where they served this yummy dessert!

Named after the Russian ballerina Anna Pavlova, this dessert consists of a light, meringue center surrounded by a crisp crust. It’s usually topped by fruit. Australia and New Zealand are actually fighting over which country invented this dessert (though, according to Wikipedia, the evidence points to New Zealand) but either way, this stuff is delish. It’s usually eaten only during holidays, though. Yet another dessert? You bet! Anzac cookies taste a bit like the oatmeal raisin cookies I’ve had at home– probably because they’re made with rolled oats. But the recipe also includes coconut and golden syrup, making this cookie into something distinctly Aussie.

Beetroot is a thing in Australia. Australians like to shred and pickle their beets and then stick them into burgers. (They like to stick fried eggs into their burgers too– which, by the way, is the BEST IDEA EVER) The result is a surprisingly pleasant taste. They also stick pineapple into their ham sandwiches, too, much like the concept of the Hawaiian pizza.

You read that right: Australians eat kangaroo. In fact, you can easily purchase kangaroo meat from any supermarket. Kangaroos are surprisingly common in Australia, in fact. They’re a pest to farmers. They overgraze Australia’s already-sparse plains. It’s come to the point where kangaroos are a huge road hazard. Think deer in the USA, but worse. Like deer, however, kangaroo isn’t an everyday meat. It’s very lean and gamey and very low in fat. In fact, there’s been a recent movement known as “kangatarianism,” where people restrict their diets to fruits, vegetables, and kangaroo meat. The argument is that kangaroos are not only naturally occurring (since they can live and thrive in the wild without human care or pastureland) but their methane emissions are much, much lower than that of cows.

When in Australia, do as the Australians do. A couple of friends and I ran over to Newtown and grabbed some kangaroo burgers. Roo burgers my friends and I got at Moo Gourmet Burgers, a burger joint in Newtown.

And how was it? The “flat white” is a coffee beverage developed in the 1980’s. Think latte, only with less foamy and more velvety milk. There’s a whole technical debate on what exactly defines a flat white versus a latte, but I’m no barista. I just like to enjoy these at the many adorable cafes in Sydney. (Sydney, surprisingly, has a huge cafe scene!) 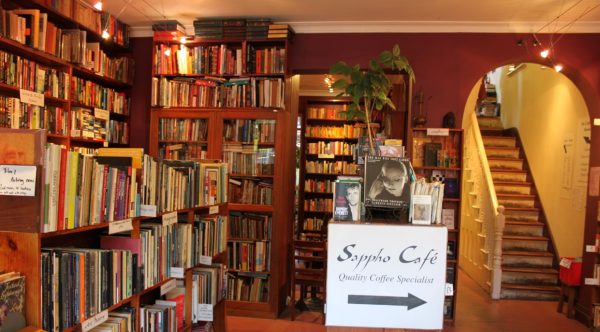 Here’s one in Glebe that I happen to be charmed by– Sappho Books. The front is a bookstore, and tucked in the back is a little cafe and bar. And, finally, my favorite: the Tim Tam. The Tim Tam consists of two chocolate malted biscuits, separated by some cream filling, all covered in chocolate. These very popular cookies come in all sorts of flavors.

These things come in great big packs and are great for drowning your sorrows in at 2 in the morning. What do you do when you have 4 essays due and an exam tomorrow? Get a Tim Tam Slam.

As far as I can remember, that’s all the novel Australian food I’ve encountered so far. Not to say that the rest of the Australian food landscape is exactly like America, though. Australia still exhibits some of that British influence in their foods, like with the popularity of the meat pie. Australia also lacks a lot of American chains. The Jamba Juices Chipotles, and Taco Bells that are so popular back in Boston are totally absent here. Instead– in the multicultural Sydney, at least– there are heaps of Asian restaurants on every corner. And not just take-out Chinese: there’s Thai, Vietnamese, Japanese… I thought I’d never see okonomiyaki again! A cute okonomiyaki I nabbed from Kurakura, an izekaya in Chinatown.

So, as with all my traveling adventures, the conclusion is the same: But, I think I’ll survive.